You are here: Home1 / Surroundings2 / The Green Heart

The area between the major cities of Amsterdam, Rotterdam, Utrecht and The Hague is called “the Green Heart.” An environment with lots of greenery, water and numerous recreational opportunities. 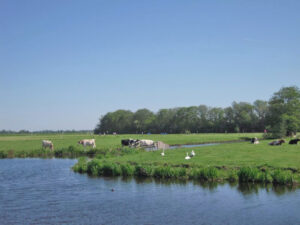 Emergence of the Green Heart

Over the centuries, a thick wet peat layer developed in this area. Due to the low carrying capacity of the soil, it was not suitable for building, but it was suitable for farming and peat extraction. Around 1600/1700, the cities around the Green Heart emerged. The intervening area was part of the strong defensive work the Dutch Waterline.

Playground of the Randstad

Now the Green Heart is seen as the playground of the Randstad. The vast and open landscape offers space like no other area to recreate, relax, spend the night and enjoy the beautiful countryside. With urban pressures around the Green Heart, government policy is now focused on keeping the area open and not over-crossing it with roads and rail lines. So that the next generation can also enjoy this beautiful piece of Holland.

Scroll to top
This site is registered on wpml.org as a development site.